Viz: Land use change around Cyprus

Description: Land use change is a complex process affected by countless factors. It is considered to be a significant driver of climate change. Land use change can be defined as any physical process or any kind of human activity that manipulates and transforms land. In particular, natural cosystems are higly susceptible to human intervention. Ecosystems are crucial for the health, stability and resilience of our planet as a habitat for our species. So what can be done to make land use change less impactful in terms of impact on ecosystems? Understanding land use change dynamics and patterns might help countries to develop better policies to protect ecosystems and also to drive development and growth towards sustainability. The data story presented here demonstrates an example of land use change, recorded during February-March 2020 in Cyprus, between the cities of Nicosia and Larnaka.


The first visualization shows the plot of raw detected land use change in three different snapshots in time. Each visualization shows a change detected in a timeframe of two (consecutive) weeks, at the dates of 15th of February (first), 5th of March (second), and 30th of March (third). Two key points can be observed: the changes in cities and the changes in rural areas do not have similar processes. Cities present a smaller (in terms of scale and size) type of land use change. Also, there is a big increase in rural activity in the transition from February to March, or from winter to spring, due to agricultural activities. To emphasise the transition, the colors on the visualization have been determined based on the size of detected change (blue - smaller, red - bigger). 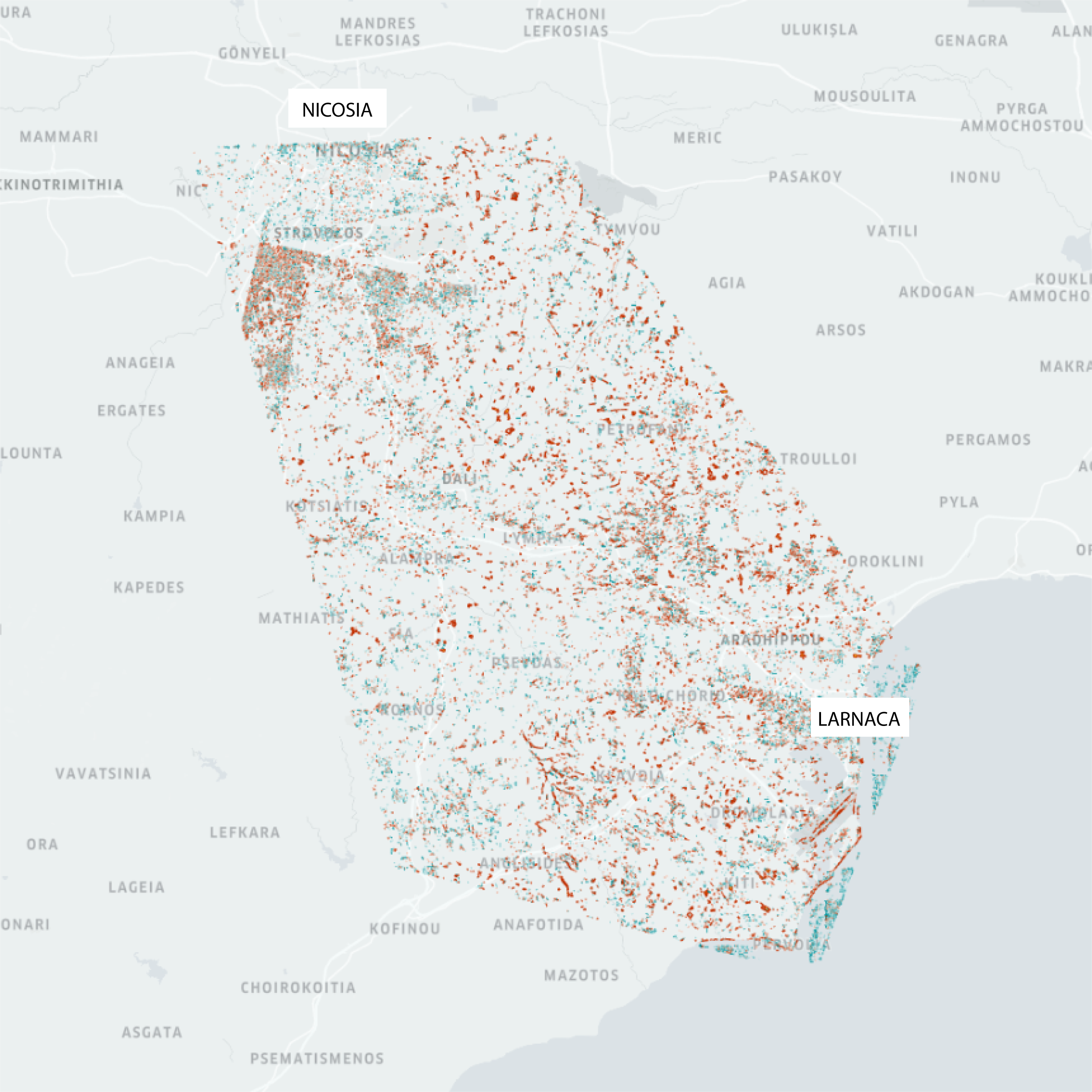 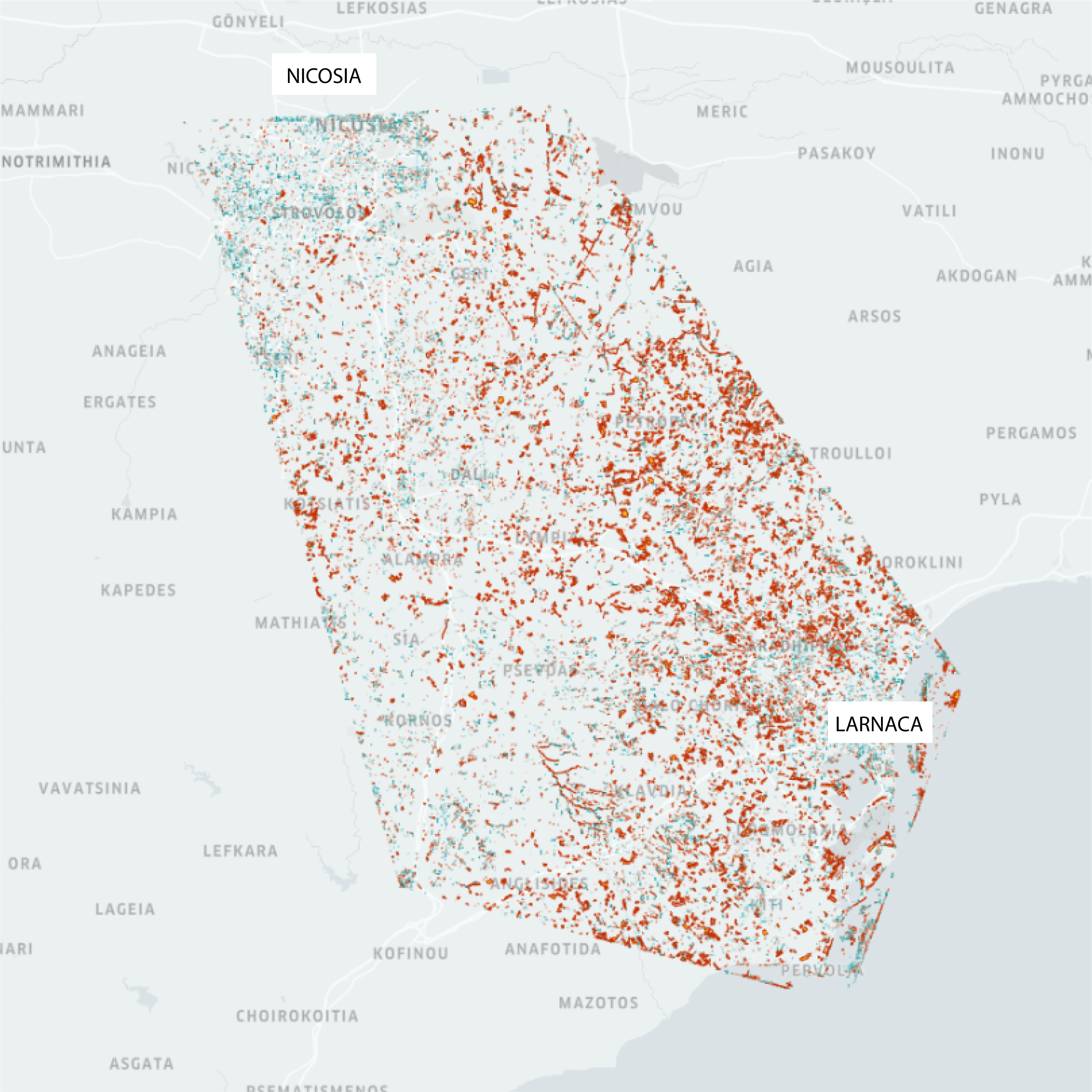 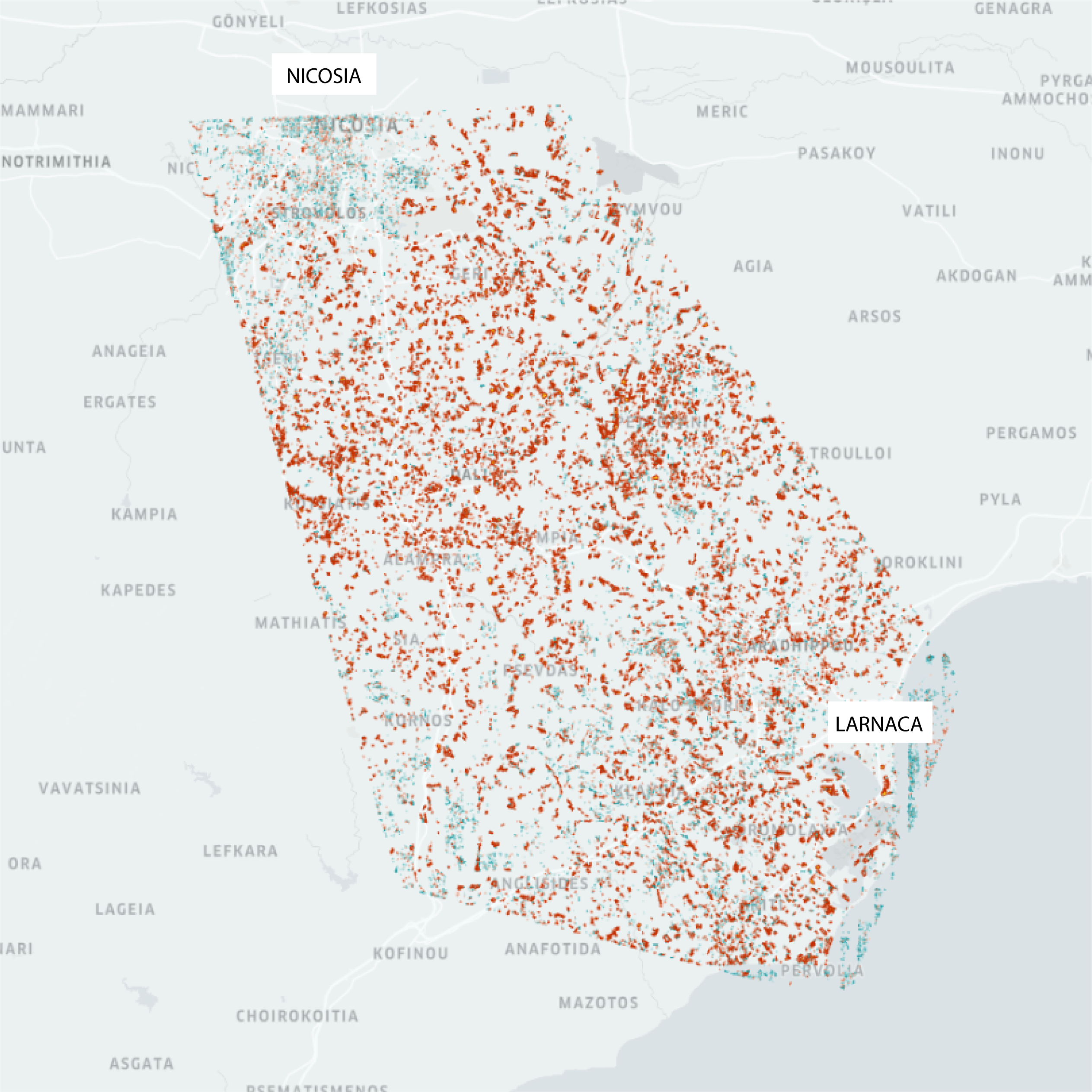 
The following visualization (interactive) brings the analysis to the next step. Through the use of geoprocessing and clustering features, it becomes more evident how the change is distributed across the studied region through time. The visualizations divide the data in a fishernet grid, where each cell of the grid is represented by one of three colors: blue, grey, and red. These colors are determined by the z-score of the hotspot analysis. Hotspot analysis calculates the amount of data points in each cell and returns a corresponding z-score. A low z-score (negative) is represented by the blue color and means that a relatively small amount of change has been detected in those area (compared to all the other areas analyzed). A medium z-score (close to zero) is represented by the grey color, and means that the amount of change in the area is statistically insignificant. Finally, a high z-score (positive) is represented by the red color and means that a high amount of land use change has been detected. The areas as described above can be also named as cold spots (blue), not significant (grey), and hot spots (red) respectively. The bottom graphs represent the plot of the sums of different statistical regions, which put further emphasis on the seasonal transition.

In the next visualization (interactive), the hotspot analysis is performed on the totality of the data, or, in other words, on the entire 6-week timeframe. The aim of this effort is to further study the concentration of land use change over a longer period of time. As it can be seen, urban areas have a higher amount of singular and separate land use changes.

The next visualization plots the totality of the dataset (entire 6-week timeframe) in relation to the latest CORINE Land cover (CLC) dataset (for 2018). The CLC inventory was initiated in 1985 and it consists of an inventory of land cover in 44 classes.The aim of the visualization here is to further study the distribution of land use change in correlation to the latest European land cover map, provided by CLC, to understand how land use change is distributed, for instance, between urban and agricultural areas. 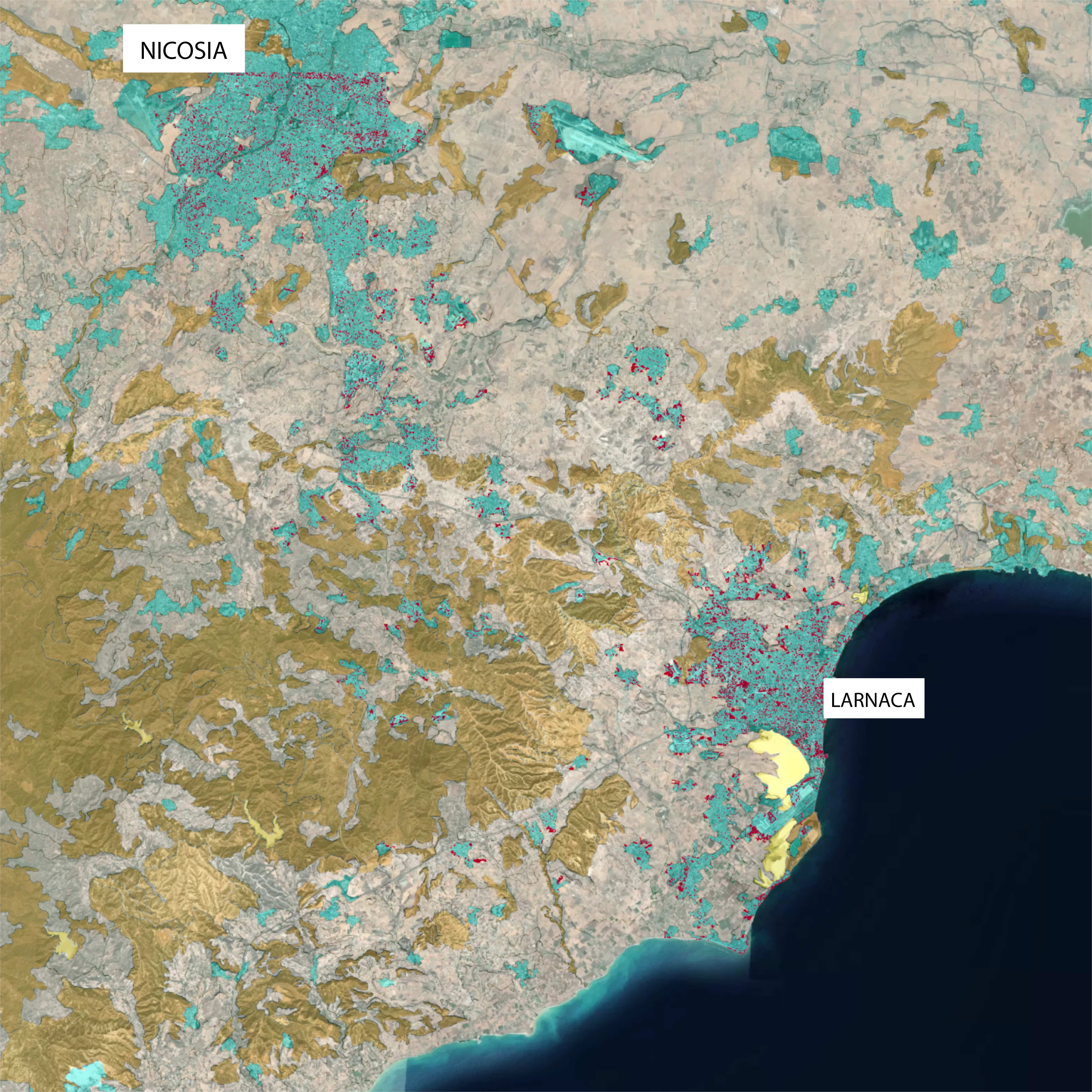 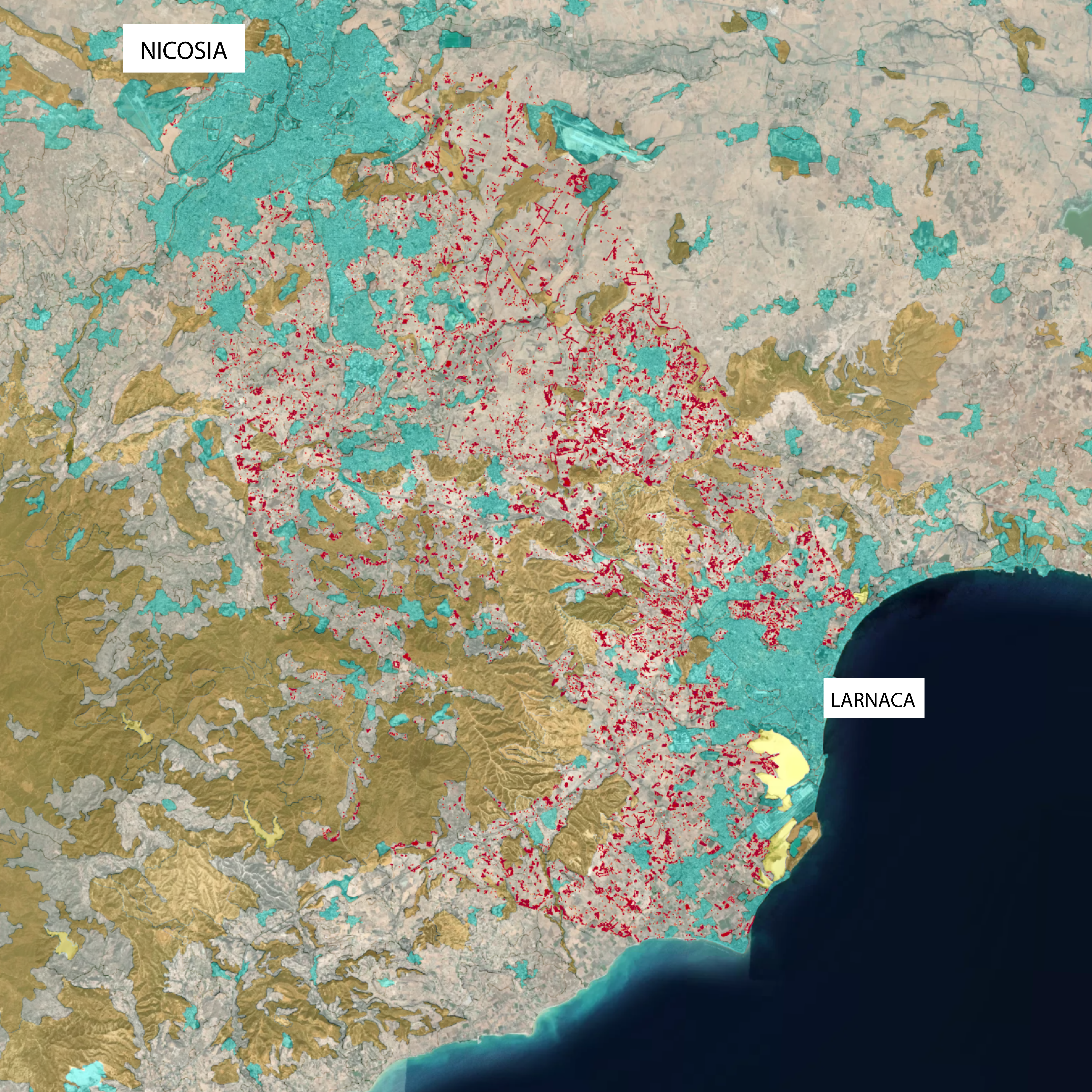 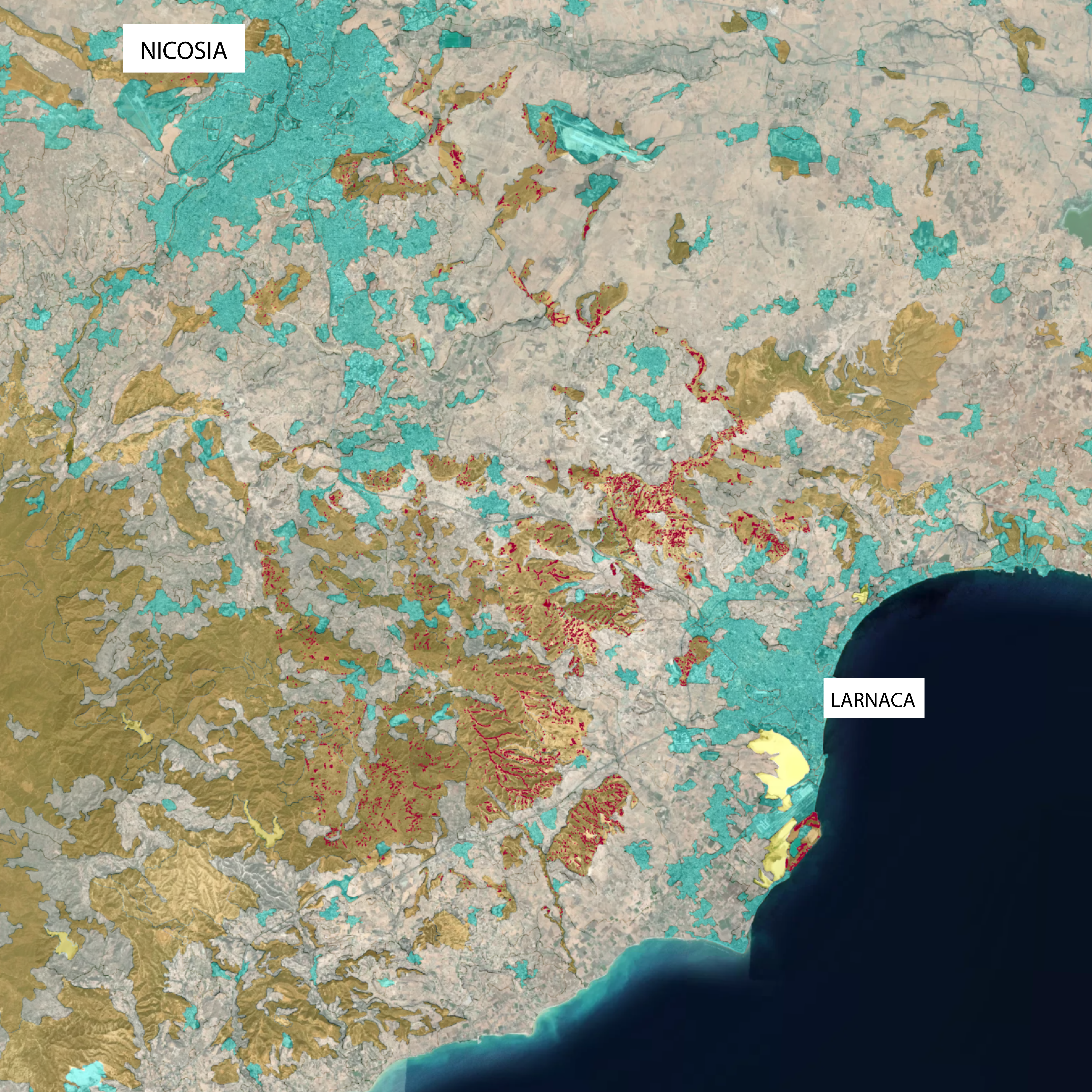 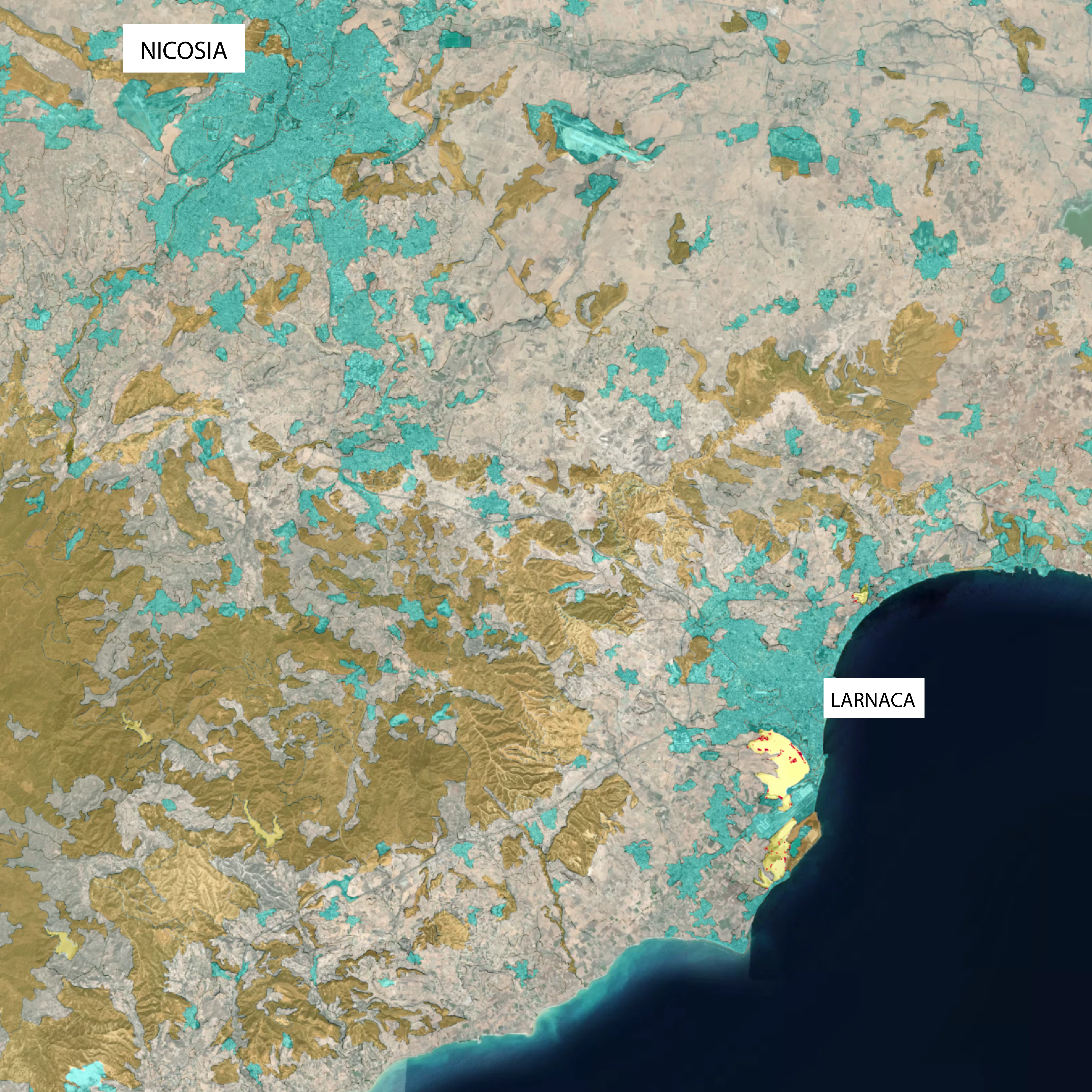 Then, the next visualization plots polygons over the detected land use change, where the height of each polygon is determined by the surface area covered by the specific change. The aim of this graph is to study the distribution of land from a scale/magnitude perspective. The plot shows that the detected land use change of greater magnitudes (higher amount of squared kilometers) tend to concentrate in agricultural areas. The four different colors are, again, represented by the differend land cover types. 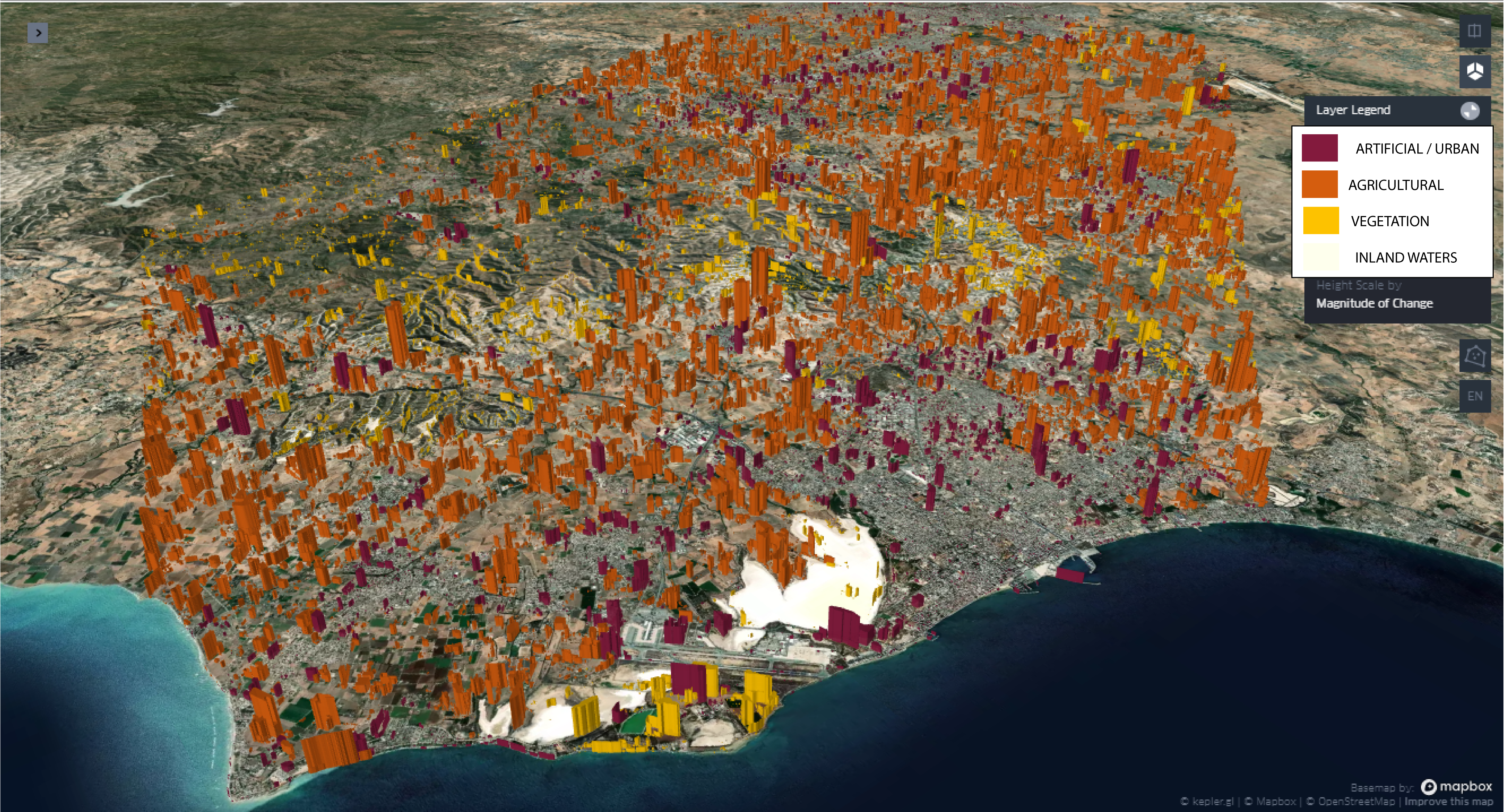 
Further, the following dashboard depicts two different analyses focusing on the two distinct urban areas under study: Nicosia and Larnaka. The first analysis (top) shows the hotspot analysis performed based on the size of each land change detected. The second analysis (bottom) represents the hotspot analysis performed on each single position of detected land use change (same as the graph above). The colors are, once again, determined by the z-score, where the aim of the graph is to confirm whether the change inside cities is more granular and small-scale, while the change outside the cities is larger in terms of area coverage.
The z-score, as mentioned above, is a way to see where most occurences of land use change (our measured variable) take place. In the case of the first graph above, the z-score reflects the size of detected change, and thus shows where the largest change is most likely to occur. In the case of the bottom graph, the z-score represents the position of each single detected change, depicting where most of the single land use changes are most likely to occur. The interactive maps allow to visualize the legend, switch basemap, and switch layers (bottom, switch between hotspot and density analysis).


From this point on, we examine the relationship of land use change with demographc factors. All the demographic datasets are provided by ESRI online repositories. The following visualization shows the correlation between human population and distribution of land use change. The X axis represents the population size at each (geographic area) cell, while the Y axis represents the z-score of that specific cell. For example, in previous graphs we have seen the plots of the z-score on the map, where areas colored in red represented multiple occurrences of land use changes. In the current graph, these areas are now visualized in a scatter plot, where the data points of such red areas tend to reside in a higher position along the Y axis, while the population size inside each area determines the X value. The population figures show a clear uptrend towards the hotspots of land use change, which indicates that most of the population tends to concentrate in urban areas (i.e. highest z-scores were shown to be located in urban areas in the previous graphs).

The following three visualizations are exploratory and give the possibility to autonomously swtich between different demographic factors. The first one compares the z-scores (Y axis), together with a selected demographic factor in a scatter plot. The 3 distinct areas filtered for each plot are: cold spots, hotspots and not significant spots. As mentioned before, a hotspot is represented by a high z-score, indicating a high probability of land change happening, while a cold spot is represented by a low (below zero) z-score and indicates a low probability of land change happening. You may interact with the graph by using the right side panel and the placeholder drop down menus to switch demographic factors. use the filters above to limit the range of the data.

The last graph compares two different demographic factors (Y axis) in correlation with the size of detected change (CLUSTER_POINT_COUNT, X axis). The band plot is divided in the four different land cover categories, as mentioned above. The aim is to further observe the connection betweeen land use change, demographic factors, and land cover. The CLUSTER_POINT_COUNT, as previously mentioned, represents the size of the detected change (alternative to squared kilometers, for technical reasons).